Bordered by Wadamalaw, Seabrook, Kiawah, Edisto, Folly and James islands is Johns Island. Two rivers separate this steadily growing community – the Stono and Kiawah Rivers – and those who leave urban areas to live here do so for its unspoiled beauty.

Johns Island has realized impressive growth. It grew a little over 13 percent from 2010 to 2018, the largest of any areas including Folly Beach, James Island, West Ashley and Charleston. From 2000 to 2010, it grew 50 percent.

The island comprises over 80 square miles and according to the latest Census data, the population is around 22,000 residents, with about 205 people per square mile.

Vertical living such as townhomes and condos has ticked up significantly, seeing a 14.1 percent jump of new listings within a year. Average sales prices for these dwellings jumped 7.7 percent within a year’s time.

Much of the appeal of living on Johns Island is the space, the rural environment and the proximity to downtown. Many consider this area of the Lowcountry to be the most beautiful. From oak alleys, large farms and stunning waterway vistas to new construction and established homes, this is what the Lowcountry lifestyle is all about.

It’s no wonder why many pick a piece of property to build their dream home. Lots are large and the views are spectacular. 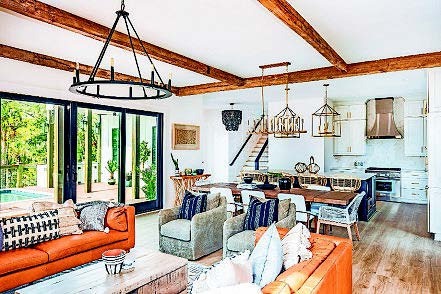 Rushland Landing is on the northern section of Johns Island, on a wildlife preserve. Most of the homes here are upscale custom homes built among 500 acres of coastal land. Luxury homes here can be as much as $1 million plus. The large community fronts the Stono River.

Large lots along Rushland Landing Road give buyers the opportunity to build among canopies of oaks, marshes, creeks and waterways that are prevalent in the area. Adam Copenhaver, a renowned Lowcountry builder and developer, loves the area so much, one of three lots he is developing is his own. In the process of building his own family dream home, Copenhaver said these three lots are within their own private enclave along Penny’s Creek.

“This location on Rushland Landing Road provides one of the last private island and creek front communities remaining on a convenient side of Johns Island,” he said. “There are just a few large lots here and over a half acre boarding deep water Penny’s Creek with stunning views. We chose not to subdivide to maximize high density. This is an example of a small private community done right.”

Believing in “purposeful design,” Copenhaver said that these properties will have a private road. There won’t be an HOA for the community but there will be restrictive covenants recorded to protect the value of the lots – one a .61 acre lot listed for $145,000, and the other, a .58 acre lot for $155,000.

“We’re deed restricting requirements so that the property values will endure and future generations will be able to enjoy quality homes in a serene natural environment,” Copenhaver said.

Minimum square builds of 2,500, low maintenance exteriors, exterior cleanliness provisions and shared responsibility to maintain entrance, monuments, landscaping and lighting are some of those restrictions.

“The proximity to River Road, Maybank Highway and Main Road make this location a prime convenience on Johns Island,” Copenhaver said. “As committed road improvements and infrastructure are completed and with even more conveniences planned for the Maybank/River Road corridor, these properties will benefit from that. With Route 526 also headed towards construction, the completion of it will give residents in this location to be most anywhere in Charleston very quickly.”

There have been recent approvals and funding for 526 with plans for the connector to include on and off ramps that will connect to River Road. The South Carolina Department of Transportation is currently working on permitting the highway with an expected start of construction within four years, Copenhaver said.

“Each lot enjoys stunning views of deep water Penny’s Creek and vista marsh views,” Copenhaver revealed. “Each may have future dock opportunity which will provide access to the Stono River and direct access to the Charleston Harbor through Elliott’s Cut.”

One of Copenhaver’s proposed builds is a 3,400 square foot “Creekside Cottage” home that will have 46 feet of decking that spans the rear of the home. The open interior will include a first-floor master and a kitchen with a bank of windows that will have unobstructed views of Penny’s Creek. 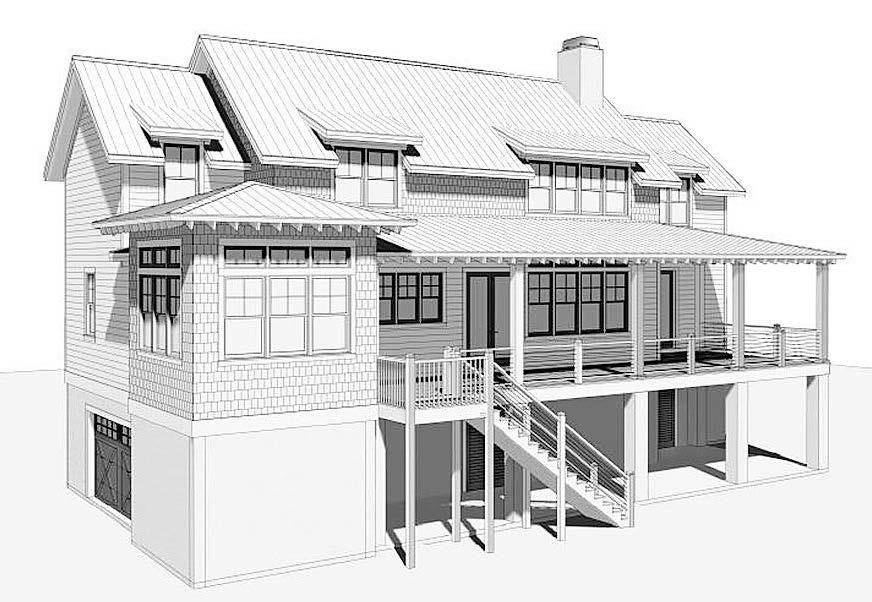 On the southern tip of the island and adjacent to Kiawah is Kiawah River Estates. Gated and luxurious, many choose to live here because it borders Oak Point Golf Course on Kiawah Island Golf Resort. Residents enjoy views of the Kiawah River and Haulover Creek. Haulover Creek separates Johns Island from Seabrook and it was first built in 1715 to accommodate trade. The creek wasn’t deep enough for sailboats so goods had to be “hauled over.”

“It’s not a surprise that housing growth continues on Johns Island,” said Maraide Sullivan of Keller Williams Realty. “The beautiful rural landscape and abundance of coastline makes it attractive to buyers who desire more space. Depending on where you live on the island, you’re within 15-20 minutes of beaches, downtown, West Ashley and many places of employment.”

Sullivan compares it to Martha’s Vineyard in terms of its size, the New England Island being a bit larger at 96 square miles. Sullivan noted that Charleston commercial developers have noticed the growth on Johns Island and are providing space for more retail and professional services. In this respect, it can be self-sufficient. With all that growth, more jobs will open for its residents.

“As this trend continues, residents won’t have to go off island for services,” she said. “They’ll go if they want to go rather than they need to go. Increased options for housing means more people live, work and play here.”

MUSC announced last year its plans to build a freestanding emergency department on Johns Island that will have exam and trauma rooms and a helipad. Self-sufficiency is definitely a trend (and much-needed) in this area of the Lowcountry.

Williams said national developers aren’t just looking to expand large planned communities. “I’m seeing a trend toward ‘proposed construction’ in smaller communities like Kiawah River Estates (KRE). It’s been years since a spec has gone on the market because they sell before they are completed,” she said. “Proposed construction helps buyers envision what’s possible on a particular lot.”

Sullivan recently listed a lot with lagoon and expansive fairway views on the Kiawah Resort Oak Point golf course in KRE. Located at 4434 Hope Plantation Drive, it lists for $179,450. The .34 acre lot is on a paved, private road. The community has a pool, tennis, dock and clubhouse.

“All KRE lots are privately owned,” she explained. “You shouldn’t dawdle if you like a lot’s location. You can replicate a house but not a view. There are beautiful lots here and throughout Johns Island.”

For those who like move-in ready, Sullivan has a home in KRE at 4287 Fripp Lane that lists for $759,900. The upgraded four bedroom home has over 3,900 square feet, is on a cul-de-sac and has lagoon and golf course views.

Olga Page, a Realtor at Maison Real Estate in Charleston decided to make Johns Island her home. A professional equestrian since the age of 10, the island offered her and her family the space they needed to live and play. Recently selling her historic home in downtown Charleston, she and her family knew that the island was the place to call home.

Off Bohicket Road, the area is an equestrian’s dream with off-the-beaten path trails and plenty of pasture to ride freely.

Choosing 13 acres on Bohicket Creek, they built a beautiful home surrounded by grand oaks. “It’s a more rural, less developed part of the island,” Page said. “Growth on the Johns Island has been brisk with thousands of new homes and apartments developed over the last several years, with more on the drawing board.”

While clearing the land, a chimney was discovered. Page had a mason from the American College of Building Arts repoint it and reattach the top portion. They had the brick and mortar analyzed and discovered it was most likely from the 1840s.

“Research didn’t reveal any home ever on the property,” Page said. “It may have been a caretaker’s home back when it was part of a 700-acre farm, hence the name Lone Chimney Farm.”

The appeal for Page isn’t just the proximity to downtown and the island’s natural beauty. It’s also the history and diverse population that makes up the unique area.

“There are families that have been here for generations,” she said. “There are also many living below the poverty level and many properties are referred to as heirs property. Post Civil War, tracts of land were given to former slaves and that’s an interesting issue. There is a heirs property group that works to help the owners who may want to sell to identify all the extended family members who have an interest in the property.”

Page’s expertise in renovating and discovering historic properties in the Charleston area piqued her interest in the history of Johns Island as well. She said the island was home to Esau Jenkins, an early civil right leader and one of the founders of the Progressive Club.

“The ruins (of the Progressive Club) are on River Road,” said Page. “His contributions haven’t been recognized as they should be. During his active years, civil rights leaders including Martin Luther King, Jr., Andrew Young, Ralph Abernathy, Stokely Carmichael, Septima Clark and others visited the Progressive Club. There is much more to the Jenkins story.”

According to the 2020 African American South Carolina History Calendar website, Jenkins, a Johns Island resident, instigated a number of services to improve the “economic, health, housing, political and social conditions of Sea Island residents in South Carolina.” His founding of the Progressive Club in the early 1950s consisted of a grocery store, gas station and recreation/education center and housed one of the citizenship schools established during the civil rights movement. He made significant contributions to his community to help low-income families.

“Aside from Johns Island’s natural beauty, it’s appealing for many reasons,” Page said. “One of the oldest churches in the country is on Bohicket Road, the Johns Island Presbyterian Church founded in 1710. The church community is vibrant with dozens of small churches.”

A vibrant and growing community with a diverse population. A historic sea island surrounded by waterways. Glorious sunsets off of the deepwater docks.

For many, Johns Island is the ultimate in Lowcountry living.

• The Angel Oak Tree on Johns Island is the largest live oak east of the Mississippi, estimated to be at least 400 years old and was named after Justus Angel, the 19th century owner of the land where it stands.

• The Johns Island Presbyterian Church was founded in 1710 and is one of the oldest Presbyterian churches in South Carolina.

• Johns Island is the largest island in South Carolina and was named after Saint John Parish in Barbados by the first settlers to the island.

• The Mullett Hall Equestrian Center is located on Johns Island and has over 700 acres, 20 miles of trails and is home to equestrian competitions, festivals and events.

• The Johns Island Branch Library that opened in 2004 is the largest of the Charleston County Public Library Branches.

SEND US A MESSAGE