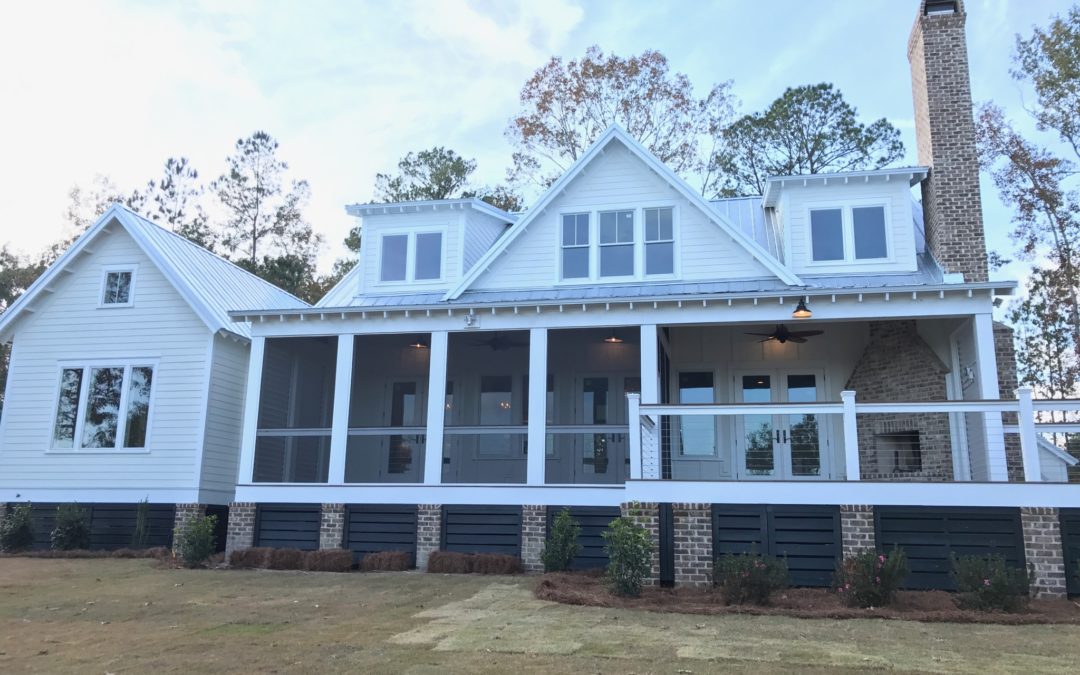 Four area builders reveal the trends and the future of building

Fast forward to the first quarter of 2019 and the median single family square floor area is 2,355 square feet, with the average square footage for new single family homes at 2,584 square feet.

I consulted four area builders to get their input and expertise – Adam Copenhaver of Cope Grand Homes, Jason Fowler of Sea Island Builders, Jay Harper of Axon Builders and Steven Kendrick of Structures Building Company – to find out what Lowcountry buyers want, how design is changing and what the future holds.

“The homes we’re building for clients as their primary residence are certainly getting smaller and more efficient, trending between 2,500 square feet and 3,000 square feet,” said Copenhaver.

Copenhaver stated this trend didn’t apply to his coastline builds since many of them are used as part of a rental portfolio or to house multiple families at one time. “It’s also becoming more common to find restrictions from certain jurisdictions on how large you can build. Increasing demands on the environment are causing municipalities to limit impervious areas from homes and one way to do this is by putting size restrictions on homes,” he said.

Harper doesn’t believe the “tiny home” fad has hit Charleston. “We aren’t seeing a change in overall square footage,” he said. “We are seeing how spaces are utilized – less large bedrooms and more space in closets and bathrooms. Large laundry and mudrooms with built in cabinetry are becoming a must, and with technology advancing so rapidly coupled with a greater number of people working from home, we’re seeing a huge increase in home offices that are often over a detached garage instead of the main house.”

Kendrick said buyers are more concerned with the right size home. “While most homes we’re building are above the 2,800 square foot threshold, what we have seen is a trend towards a more ‘right-sized’ home. It doesn’t feel like buyers are overcompensating space, but rather putting that time and money into high quality interior finishes, low maintenance exterior materials and hurricane-proofing.”

Kendrick said he’s seen a demand for smaller homes recently in Mount Pleasant and the new Kiawah River community area, citing Edwards Place, an upscale community that is currently being constructed in the Old Village, as one example. According to its website, Kiawah River, “a sea island village at its start,” is a new development that will comprise cottages and villas that practice “ideals for quality, sustainability and green building practices.” Square footage for some of these dwellings at the new community will start at around 1,700 square feet.

Fowler noted home and lot size varies depends on the client. “We recently completed a major renovation on a three-level townhome in Toler’s Cove for our clients who had sold their large family home and wanted to downsize to a turnkey luxury townhome that will better accommodate their desire for international travel. On the other hand, we completed a custom home for a couple in Awendaw who wanted wide open spaces, water views and plenty of square footage to accommodate their extended family and grandchildren.”

Open floor plans – in or on their way out?

“Open floor plans are here to stay,” Fowler said. “All of our current projects have a large open concept layout, including kitchen, living and dining rooms. Parents want to be able to keep an eye on kids while cooking and an open concept provides space for entertaining without feeling cramped. This design provides flexibility in the event the homeowner wants to make changes or move things around in the future.”

Kendrick agreed but noted an exception he has experienced with some clients. “The one living space we occasionally see being separated from the rest is the dining room, especially if someone is bringing formal furnishings or heirlooms with them. One more separated space that we see is an ‘away room’ or a quiet place where the empty nester husband or wife can go to have some privacy, watch a ballgame or work on a hobby or read.”

Copenhaver believes the open concept floor plan is here to stay but says his experience is that clients’ lifestyles, hobbies or the need for a more private area dictates on how that plan is laid out. “We find a location in the home’s design where these (private areas) will function better. These spaces beg to have a totally unique interior design element which requires them to have a more formal and private location. We build a fair amount of in-law suites and accessory dwelling units.”

“Defined” open space designs give buyers the best of both worlds. Builders are creating spaces inside homes which allow family interaction, but also incorporate innovative ways to designate different working and living zones.

Accessory dwelling units (ADUs) can also serve as a private space for a family member – from “she sheds” to art studios to home offices to garden hubs, buyers want these spaces and builders are coming up with unique designs to do just that.

The latest trends – what are you seeing in design and materials?

“The biggest trend we’re seeing is product and material selections that require a minimal amount of maintenance. With storms being more frequent the last few years, impact windows and doors are frequently requested,” Harper said. “This does away with hurricane shutters or plywood or having to spend time securing them. Many buyers are choosing to upgrade the exterior with composite materials that require less painting and can withstand the harsh Lowcountry climate.”

Copenhaver said that while shiplap and the farmhouse design concept so popular on home design programs are likely to stay a while longer, they find creating unique features are what clients are gravitating towards. “Clients like personalized design elements and these become more valuable to them than what they see on TV each day. A concept we get excited about these days is designing a home that interacts well with its environment. There is a lot of attention to detail that goes into this, but in Charleston and the surrounding Lowcountry, we’re so fortunate to be able to design a home that doesn’t require it to be so large because the landscape design allows it to use its outdoor rooms so well.”

Kitchens and baths are a priority for most buyers – any new trends?

Copenhaver agreed that his clients use the kitchen to show off their own unique styles. “We see a lot of creativity in each of our kitchens and rarely these days is one similar to another we’ve already built. In baths, we’re seeing a lot more color in tiles. White subway tiles are sticking around, but we’re mixing in other tile profiles – penny tile and base and cap mouldings.”

“Our designers have identified a shift from natural stone to lower maintenance materials such as quartz and ceramic tiles. Another trend is natural wood accents using painted or reclaimed wood materials, be it on an accent wall, kitchen island or cabinets. Warmer tones and large kitchen islands are very popular,” Kendrick said.

Kitchens are and always have been the heart of the home. Open design allows the “heart” of it to embrace a larger space. Individual tastes shine while incorporating tried-and-true design. “Clients are opting for more timeless design selections throughout the home, bringing longevity to the project as opposed to current design trends that are more transient in nature,” Fowler commented.

Do buyers come with plans in hand?

“For most of our clients we work with them through the entire design phase,” Kendrick said. “By working with us and the architect at the same time, they achieve their dream design while keeping a budget and schedule in mind which allows them to manage their expectations accordingly.

Harper said his buyers comprise a mixture. “We work with some great clients who are our strongest advocates and they refer their friends. We can help select an architect for them, but we do see many clients who already know what they want and bring plans, then come to us to make it happen.”

“We’ll always make a recommendation for an architect or draftsman depending on our clients’ budgets and desire, but we also enjoy being part of the design process. Our preference is to be involved early in the process because we have a lot of experience finding land, evaluating land value and identifying how the design of a home can improve the land’s value even further,” Copenhaver stated.

Would you care to comment on the future of building?

“Clients are interested in using materials that are more earth-friendly and we’re seeing a trend towards sustainable and green building,” Fowler said. “We give clients the option of a flood risk assessment study to determine how potential flooding may impact their home or property.”

Fowler said their technology allows buyers to understand Charleston’s flood maps in order to properly analyze current flood conditions as well as forecast the potential effects that climate change and sea level rise projections may have for the next 25 to 30 years. “Clients want homes that are both low-maintenance and built to withstand the elements of living in the coastal environment.”

Kendrick agreed his clients are seeking low-maintenance living, as well as more village-like communities. “Timeless Lowcountry architecture, high quality interior finishes, low maintenance exteriors and communities that are walkable with beautiful green spaces to gather will run the market. The trend is toward ‘right-sized’ homes.’”

“There will always be a hot trend or product,” Copenhaver said. “I think the future in Charleston will include homes that are built stronger and safer to withstand our coastal storms and I hope to see more technical building envelopes that require less maintenance and withstand harsh coastal conditions.”

The future of building in the Lowcountry and throughout the country is most definitely leaning toward more green and sustainable building. Energy-efficient homes using materials that are enviro-friendly are here to stay.

Buyers are conscious of their carbon footprint. So are builders.

SEND US A MESSAGE

Real Estate Edition within the Post and Courier: View Here